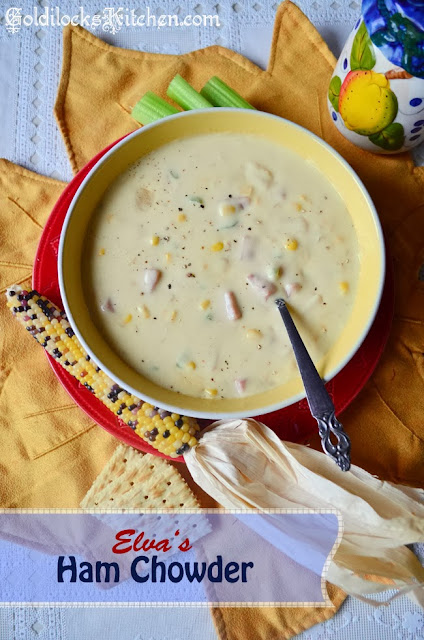 You’ll enjoy creating Elva’s Ham Chowder at home because it’s simple and full of delicious flavor. Your taste buds and tummy will thank you for making Elva’s Ham Chowder tonight. Mmm, Mmm, Mmm! I often hear my husband singing the old Irish tune “Who threw the overalls in Mrs. Murphy’s chowder” when I whip up a pot of this soup :0) 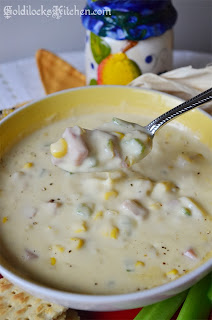 Yet another recipe from my husband’s grandmother, Elva’s Ham Chowder easily doubles to feed a crowd. You probably have most of what you need to make it in your pantry already. Cubed ham is sauteed with onion and celery to add flavor and soften the vegetables. Then you just add canned corn, cream of chicken soup, cream of potato soup, and evaporated milk. One package of cream cheese is melted into the mixture, and you’ve got a thick and hearty soup that satisfies your appetite.

If you desire, you can thin the soup a bit with milk. I personally like it thick and hearty. Do not add any salt to this recipe, the ham and soups impart quite enough salty flavor on their own. If it’s too salty for your liking, adding milk can also help bring the saltiness down a bit. I love adding freshly ground pepper to a hot bowl. Recipes like Easy Bread Bowls or Quick Crusty Dinner Bread would go wonderfully with Elva’s Ham Chowder to round out a hearty dinner!

This hearty ham chowder will warm your soul and have you licking the bowl.