Here’s an in-depth look at how to roast green chiles, why are green chiles roasted, and how to store freshly roasted green chile.

Green Chile roasting is a New Mexican tradition that goes back centuries and is celebrated each fall, bringing families together to prepare and preserve this firey harvest.

This celebrated crop can be found throughout the U.S. in supermarket produce isles or in cans (usually in the Mexican food section). The smell of roasting green chile alone is enough to bring New Mexicans running, so what is it about these chile peppers that makes them such a big deal?

Chile plants were first cultivated in Central America many thousands of years ago. Once the Americas were discovered, the chile plant was traded as a commodity throughout the world (including the far east) on established Portuguese, Spanish and British trade routes. When the first tasting of chile occurred by Columbus and his men, it is said that Columbus himself called them “peppers” because their spicy flavor was similar to the black peppercorns that Europeans were familiar with back home, so the name ‘pepper’ stuck.

When Spanish conquistadors and troops made their way north to what is now New Mexico from Mexico in the late 1500s and early 1600s, they also brought chile plants/seeds with them and shared them with the pueblo people. When Spanish settlers moved in afterward, chile cultivation took off thanks to the beautiful New Mexico climate and rich soils along the streams and rivers. As the growth of this staple crop continued for hundreds of years, regional varieties were developed, and harvest time in the late summer to early fall became a celebrated event all around the state. Chile peppers are now a unique part of New Mexico cuisine and culture, especially in the small town of Hatch, known for growing the world’s best chile crop :0)

What’s the difference between red and green Chile Peppers?

The flavor of green chile is beautifully enhanced by the deep smoky flavors that come with roasting. Roasting also helps by burning off the tough waxy peel that you really don’t want to eat (it’s like chewing on a thin piece of plastic). The chile is then made into sauce or chopped up and added to any recipe your heart desires.

Color doesn’t matter when you’re wondering which type of chile has more kick. What matters is the particular variety of chile. Capsaicin, the chemical that gives chile peppers their distinctive “hotness” exists inside the chile pod in both the green unripened stage and the ripened red, orange, or yellow stage. Capsaicin is measured on the Scoville Heat scale as seen in the chart below.

Red chile pods can also be roasted (I personally LOVE a blend of roasted red and green). More often they are either dried and ground to powder or tied together in a hanging strand called a ‘Ristra’ that is proudly displayed on porches all throughout the region. A ristra does serve a purpose (besides looking pretty); a few chiles are picked off at a time as needed and used to make fresh red chile sauce.

The famous New Mexican question you WILL be asked when you order food in a restaurant is, “Red or Green?” Your answer should be, “Which is hotter today?” Or simply ask for what you prefer; mild, medium, or hot.

But be warned- any chile sauce will probably be ‘hot’ if you’re not accustomed to eating spicy foods. I personally stick to the mild varieties- Poblano and Anaheim. You can visit here or here for more in-depth resources on chile varieties and their level of ‘heat’.

How to roast green or red chile peppers

However you choose to roast your chile, it’s very important that the process moves quickly, and that you wear gloves. Roasted chiles must be refrigerated within TWO hours of being cooked to keep harmful bacteria from growing and possibly causing illness. Pack roasted chile in thin bags so it can chill quickly and evenly in the fridge or freezer.

1. How to roast chile peppers on a gas or charcoal grill

Place red or green (or both) peppers in a single layer over the hottest setting on your outdoor grill. Using long-handled tongs, turn each pepper until all sides are blistered and turning a greyish-black, about 6-8 minutes. Remove and place in a single layer to cool. You can cover them with a towel if you want them to cook and soften further. It’s up to you. The skins should come off fairly easily either way when they are cool enough to handle.

2. How to roast chile peppers over a stove burner

This is easiest when you can place your chiles on a wire mesh chile roaster set over a burner. Using long-handled tongs, turn each pepper until all sides are blistered and turning a greyish-black. Remove to cool. Cooling them covered will soften the chiles more as they steam from their own heat. Roasted chile’s left out in a single layer uncovered will cool faster and the chile flesh will be a little heartier and rip less. This is good for Chile Rellenos!

3.How to roast chile peppers with a broiler

Preheat your broiler on high. Place fresh chiles on a broiler rack or a sheet pan in a single layer. Watching carefully, rotate/flip chiles with tongs to help them blister evenly. Remove and cool to peel. Again, roasted chile’s left out in a single layer uncovered will cool faster and the chile flesh will be a little heartier and rip less. You don’t have to cover and steam.

If you’re lucky enough to live in NM, buying a bushel (or two or three) of freshly picked green chiles and having them roasted in a barrel roaster is as easy as visiting literally any local grocery store. I happened to purchase a 40-pound burlap sack of anaheim chile this year at Wagner farms in Corrales. The chiles were emptied into a barrel roaster through an opening and then blasted with propane fire as the barrel slowly spun them around.

The tasty flesh inside the chile takes on an amazing deep smoky flavor while the skins both protect the insides from burning and turn a charred black color. Once the chiles are done they are emptied and tied up tight into large plastic bags. The roasted chiles will be very warm in the bag and will steam inside the bag while you drive home, helping the peels to come off even easier.

AVOID placing your hot freshly roasted chiles into a plastic bag. I didn’t realize this until later! The chemicals from the plastic bag may leach into your chiles. Instead, place them in disposable aluminum roasting pans or a large stockpot, or even a pillowcase instead to transport them home.

After sweating the chiles, it’s time to prep them for the freezer. Many families and friends gather together in the kitchen to prepare large batches of chiles by working together to peel and remove the seeds and stems, chop, then freeze in zipper-lock bags. Those that don’t have anyone around to help will likely skip the peeling and seeding and just put the chiles straight into smaller freezer bags to be thawed, peeled, and seeded as needed. I just wanted to get all the work over with so I peeled and seeded mine right away.

All Chiles contain various amounts of capsaicin. This chemical is actually found in the ‘veins’ or ‘ribs’ inside the chile pods, not in the seeds as many folks think. However, when your chiles are roasted, that capsaicin is spread throughout the inside of the chile and the seeds, so PLEASE wear gloves when working with chile peppers so the chemical doesn’t spread to your face, eyes, or anything else.

How to peel roasted green chile?

I gently run water in the sink to help wash the skins off; placing a colander underneath will prevent your sink from getting clogged up with peels and ruining your garbage disposal if you have one. Then I have a large bowl nearby for the peeled and seeded chile. Once done, large handfuls go into quart-sized zipper locked baggies and right into the freezer for later. Now my family can enjoy roasted green chile all year round!

Wondering what recipes to whip up for your freshly roasted green chile? Check these fabulous recipes out to get you started! 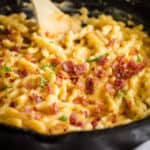 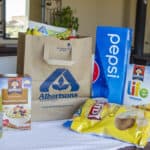 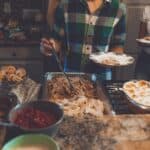 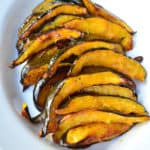 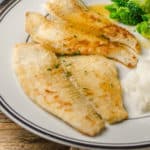