These Apple Cinnamon Cupcakes are STUFFED with Apple Flavor. 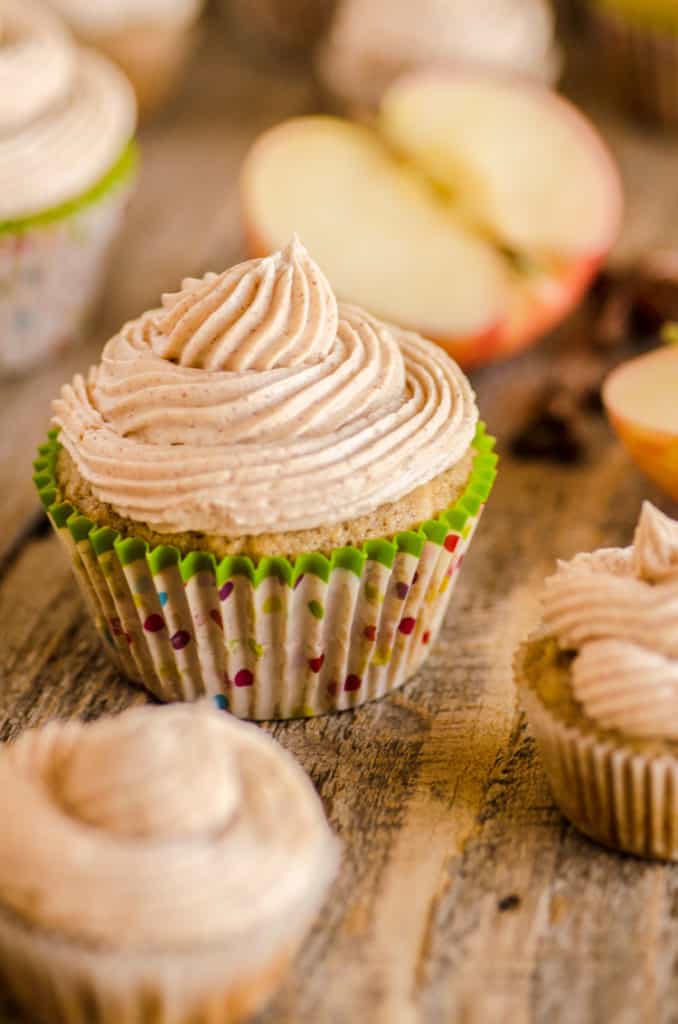 Celebrate apple harvest by making a batch of Apple Cinnamon cupcakes, which are packed with applesauce, apple cider and fresh diced apples! All topped off with the most delectable Cinnamon Buttercream Frosting recipe on the internet.

How to make cake batter from scratch

When making cake batter from scratch, it’s typical to first mix together flour, baking soda (and sometimes baking powder), salt and any additional dry flavorings, like spices or cocoa powder, in a bowl separate from the rest of the “wet” ingredients. There’s a good reason for this; baking soda will react with liquid ingredients immediately and start producing carbon dioxide, the gas that causes these baked goods to rise. Best to delay this reaction as long as possible, so most of it can take place in the oven. Also it’s important to check the expiration date of your baking soda or powder- if it’s out of date don’t use it; chances are, it won’t work. 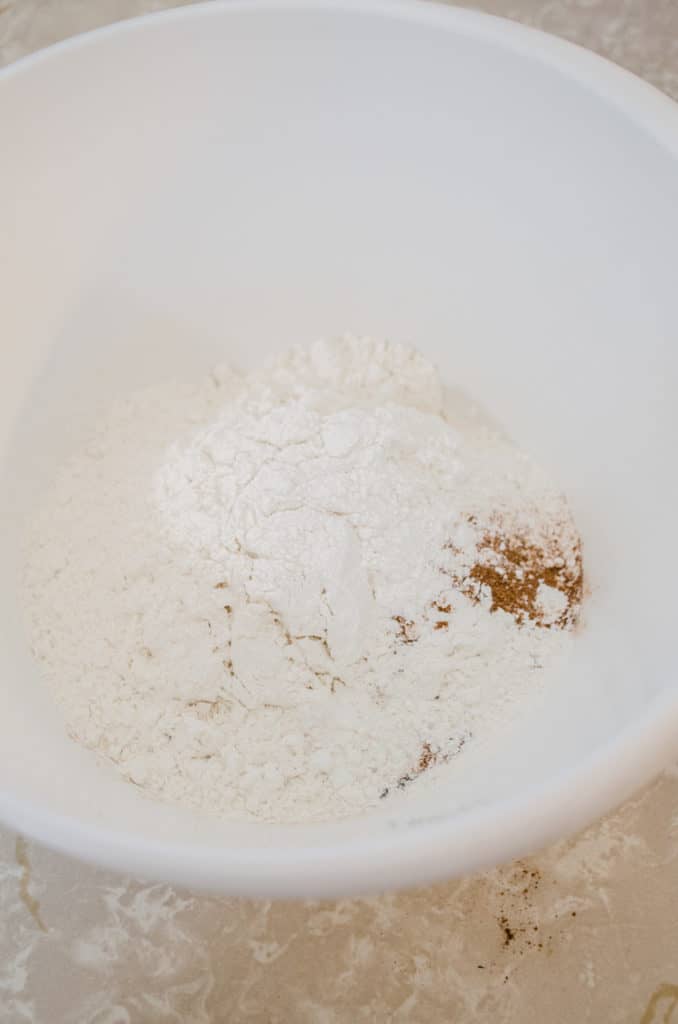 Mixing dry an wet ingredients separately also helps to cut down on excess gluten that can form from over-mixing cake or bread batters. Mix wet and dry ingredients until JUST combined. Too much gluten from over mixing will cause your cupcakes (or cakes) to turn into hockey pucks and bricks instead of light fluffy cake, counteracting the chemical leavening you have so carefully measured into your recipe. You do NOT want to spend your precious time making hockey pucks right?! 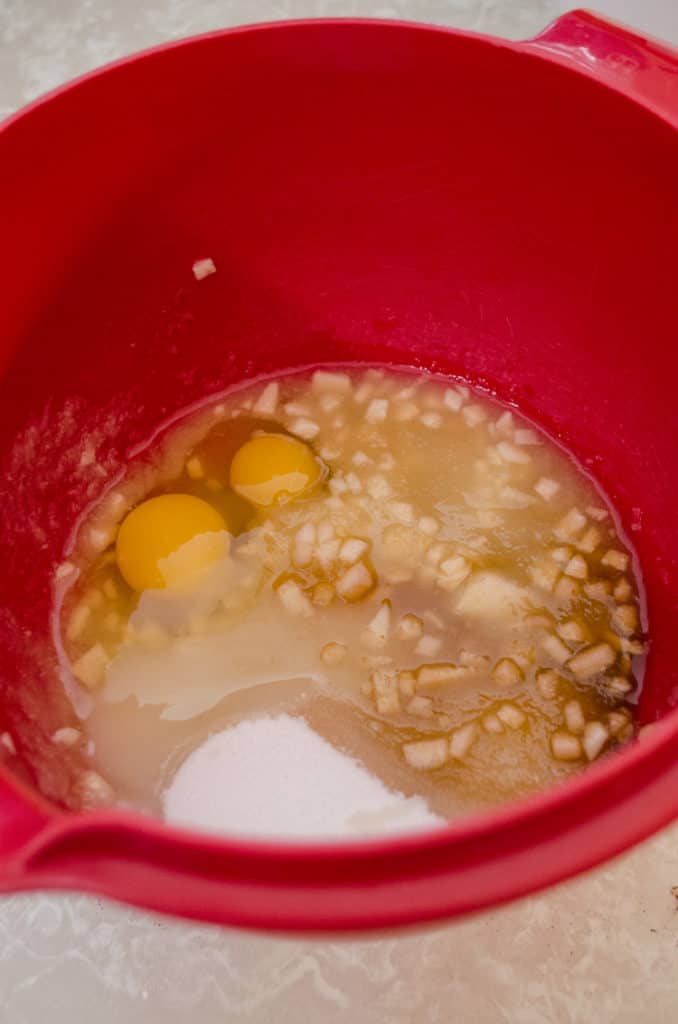 Eggs also help to give cakes lift, as well as richness and structure. In the picture above, eggs are mixed with applesauce, fresh minced apple, apple cider, melted butter, vanilla and sugar (which is always mixed with the wet ingredients since it dissolves in liquids).

Apple cider, applesauce, and freshly diced apple are all included in the cake batter.

I really wanted the apple flavor to stand out in these cupcakes, so I packed in the apple flavors with not one, not two, but THREE different apple products to really make my Apple Cinnamon Cupcake recipe stand out above the rest! 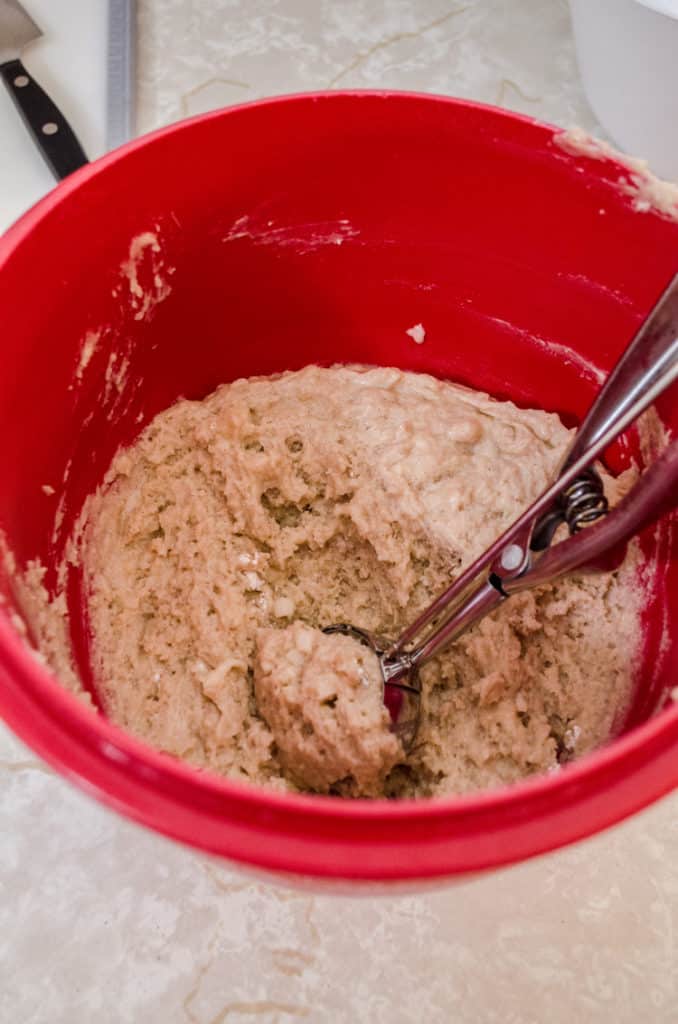 I love using mechanical scoops to easily and evenly portion out batter for cupcakes. It really makes a cinch out of filling cupcake liners. 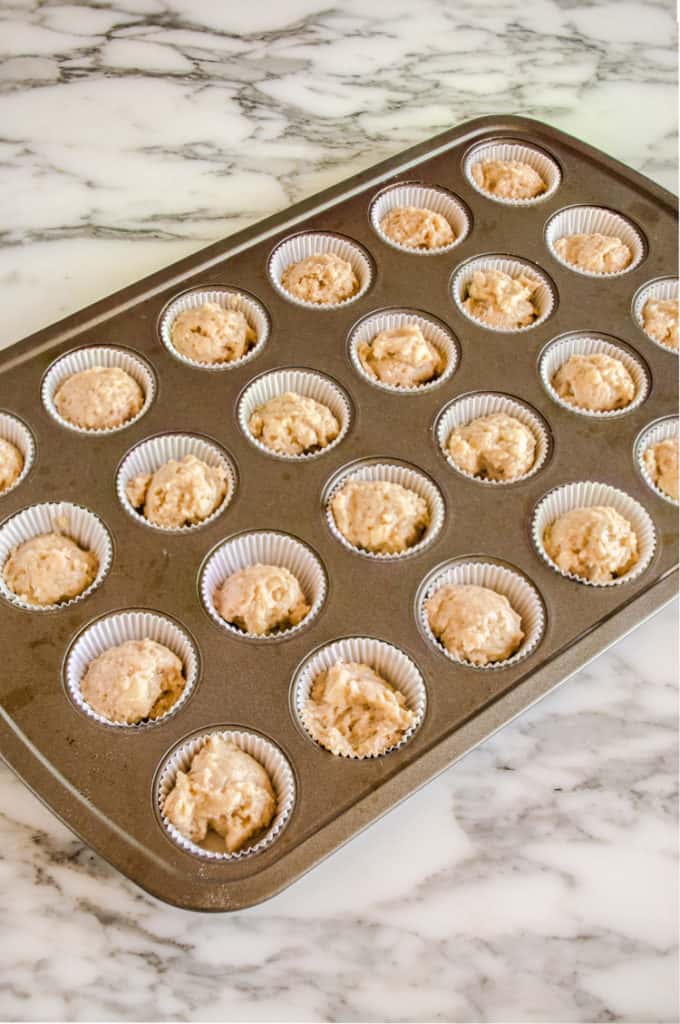 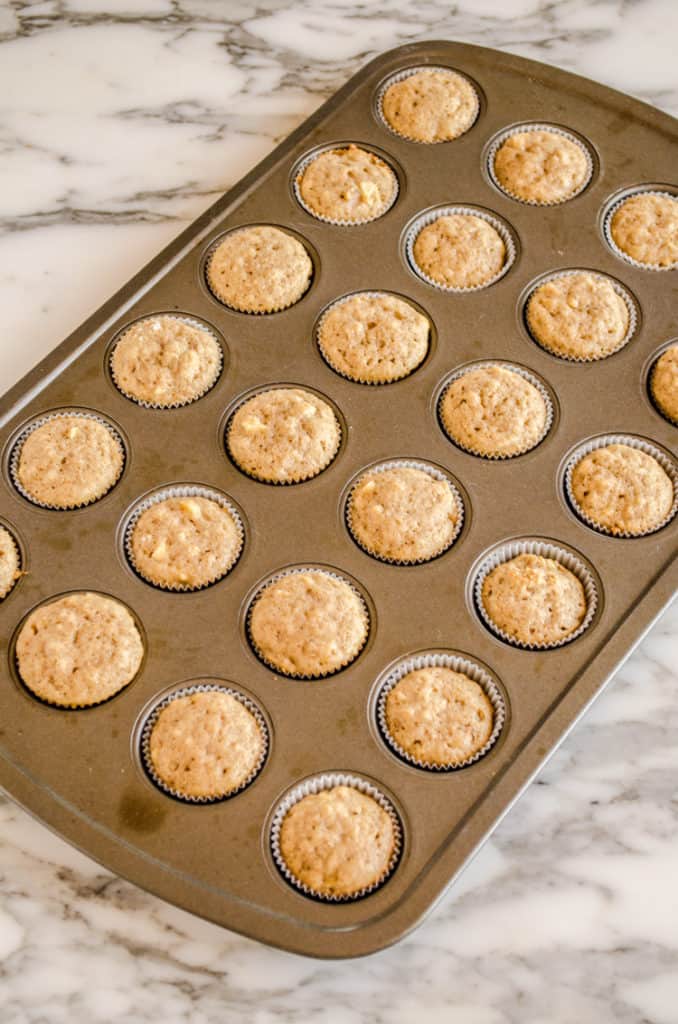 You can actually see these Apple Cinnamon Cupcakes bursting with apple flavor with all the diced apples poking out the top! 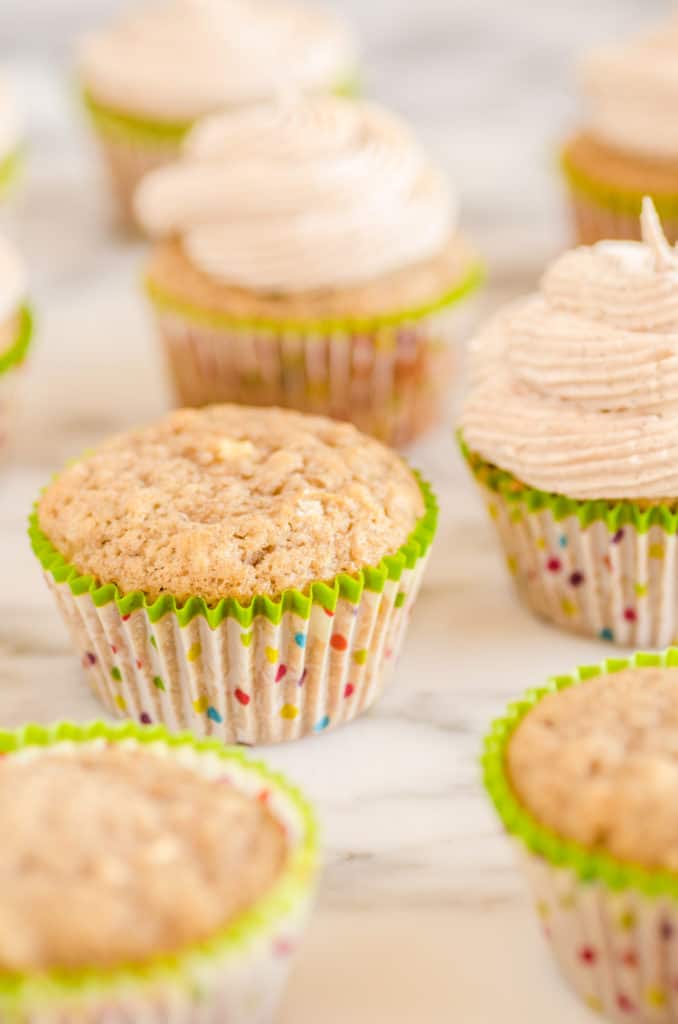 The perfect accompaniment to these Apple Cinnamon Cupcakes is a fresh batch of whipped Cinnamon Buttercream Icing. This fluffy icing is tinged with the perfect amount of cinnamon and sweetness. 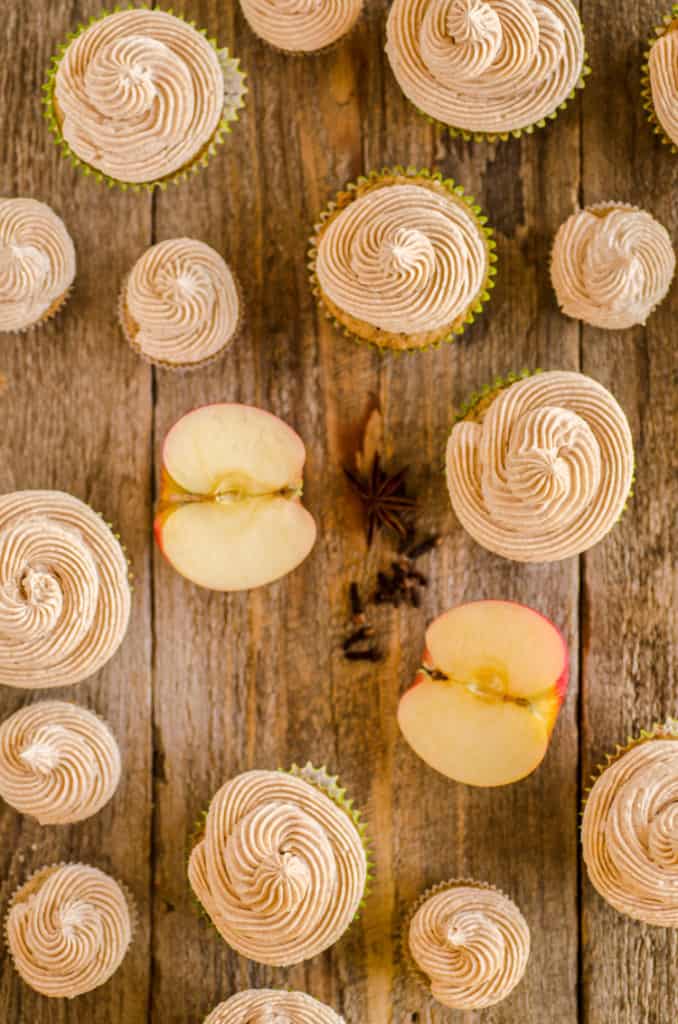 Oh these cupcakes are really a special treat- just perfect for celebrating the arrival of the fall/holiday season. I absolutely LOVE these cupcakes, especially the little bits of freshly baked apple in them. 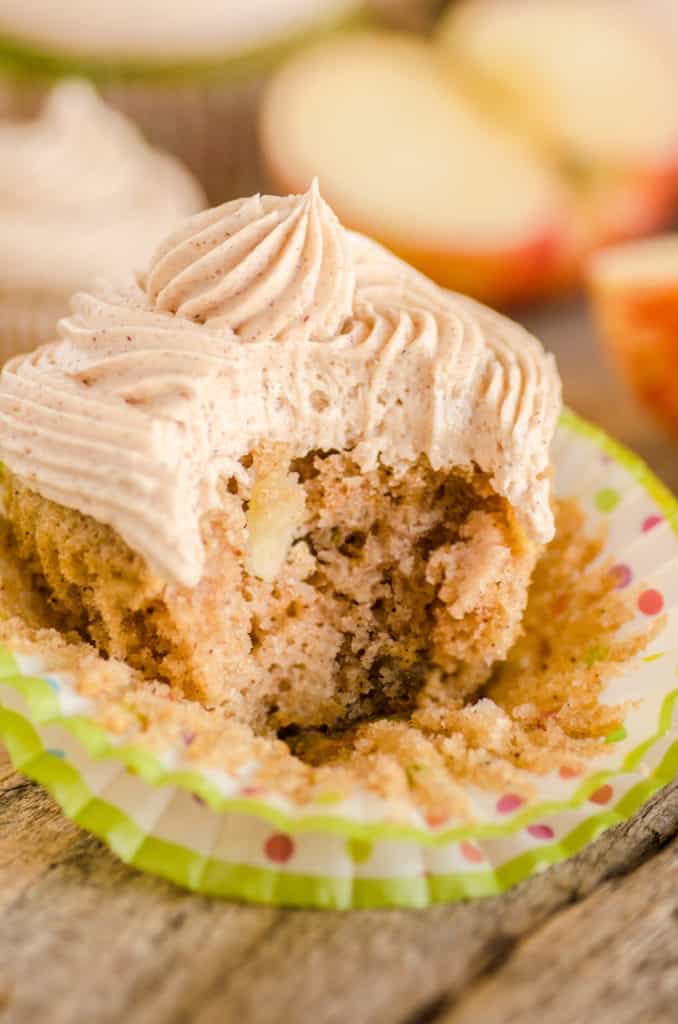 This recipe for Apple Cinnamon cupcakes makes a delightful treat that friends and family will love. So bake up a batch of these cupcakes, along with some Cinnamon Buttercream Icing, and celebrate all the wonderful things of apple harvest time. Enjoy!

Moist and full of flavor, these Apple Cinnamon Cupcakes are an apple lover’s delight. Apple cider, minced fresh apple, and apple sauce are included in the cake batter to pack in the apple flavor. Top with Cinnamon Buttercream for the ultimate fall harvest baking treat!

For mini cupcakes: follow the same directions except bake for 15 minutes instead of 25. 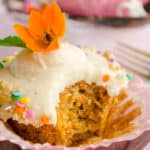 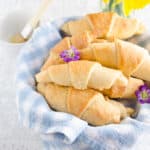 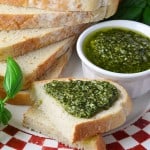 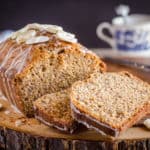 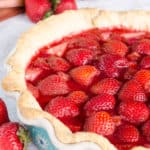