You are here: Home / Cooking Questions Answered / The REAL difference between Chowder vs Soup vs Stew

What is the difference between chowder, soup, and stew?

As we dive into the definitions of these terms, keep in mind that ‘soup’ is the umbrella term that all these can technically fall under, and that people are getting very creative with recipes these days, pushing the boundaries of these definitions.

The difference between chowder, soup, and stew is that chowder is a soup made with broth that is thickened with flour and cream, with seafood and/or vegetables mixed in. Soup is made with water or broth and can host a variety of ingredients like pasta, vegetables, fruits, grains, meats or seafood. Stew is for cooking cuts of raw meat and vegetables that are sprinkled with flour and sautéed first before being covered with broth and slowly cooked to thicken the broth and tenderize the meat.

The difference comes down to the base liquids that chowder, soup, and stew are made from and how those are manipulated to create different textures and flavors best suited for their featured ingredients.

In this article I’m going to help you understand just exactly what you are ordering from the menu, or the end goal of what you’re striving to cook up in your kitchen- either with a recipe in hand or whipping up your own personal culinary creation. Let’s explore more below.

What is a stew exactly?

Stew is meat and hard veggies (carrots, celery, potatoes, parsnips, squash) sautéed with seasonings, then sprinkled and cooked with flour first before pouring in broth (and sometimes wine or beer) and slow cooking for hours. This will create the hearty, chunky, goodness that classifies as stew. Sometimes stews are thickened even further with cornstarch or tapioca, suspending the ingredients in a delectably thick, yet silky and shiny sauce.

I live to build stew recipes. Leftover Turkey stew, beef and barley stew, and Lamb Stew with Dried Plums are my very favorites; I’ve even cooked rabbit stew, and it was finger lickin’ good too!

What is soup exactly?

Soup is any kind of food cooked in a liquid. Foods like mushrooms, grains, beans, rice, vegetables, fruits, nuts, pasta, bread, meat, leafy greens, fish, crustaceans, and even nuts can be cooked in soups. Liquids can be water, meat or vegetable broths, milk, or alcoholic based liquids such as wine or beer. Generally, soup liquids are thin and not as thick as stews and chowders. Just to be clear, oils are not a base for soup (even though they ‘technically’ are liquids) but should be used sparingly to sauté ingredients or garnish a bowl of soup.

Soup may be served warm, hot or cold (as for gazpacho); the liquids can be clear or opaque and can be thickened or left thin. Some soups will have all ingredients pureed before serving. Soup can have toppings or garnishing such as fresh herbs, cooked bacon bits, crackers, or croutons. The combinations of ingredients and liquids can be endless, so the definition of a soup can be a bit vague.

What is chowder exactly?

Chowder is a soup made with a liquid base of broth and thickened milk or cream featuring seafood or vegetables. Classic chowders are very thick and are often served with a garnish of crackers or hard biscuits. New England clam chowder is arguably the most popular or famous of all chowder recipes in the US, but there are many others, including shrimp, scallops, crab, and lobster chowders.

Many folks have taken the broth and cream base of chowder and created some delicious ‘chowders’ that have nothing to do with seafood, such as Elva’s Ham Chowder, creamy vegetable chowder, and southwest corn chowder

Why is chowder called chowder?

The term chowder comes from the crock or large pot the French would use to cook their stews. According to Whatscookingamerica.net,

“Chowder has its roots in the Latin word calderia, which originally meant a place for warming things, and later came to mean cooking pot.  The word calderia also gave us cauldron, and in French became chaudiere.  It is also thought to come from the old English word jowter (a fish peddler).”

This information made so much sense to me, because I know the word ‘chaud’ means ‘hot’ in French. It’s not a big leap to go from chaud to ‘chaud-er’ then chowder! I also happen to be a geology buff, and we often talk of ‘calderas’ in geology, as they are giant bowl-like depressions of dormant volcanoes!

What makes chowder different than soup?

What makes chowder different from soup? – both ARE soup; ‘chowder’ being a thick white creamy soup often featuring seafood, and ‘soup’ being the umbrella term for all foods cooked in liquids, including chowder. I’ve often wondered what makes a chowder a chowder and a soup a soup. Now I know! And I’m happy to share that knowledge with you!

What makes chili different than stew?

Chili is a very thick tomato or broth-based soup invented in the western United States in the 1800’s that features beans and ground meat along with a mixture of several herbs and spices; the main spice always being red chili powder, hence the name ‘chili’. Stew slow cooks’ chunks of meat and vegetables in broth/wine to tenderize.

Chili builds its flavor by combining all liquids, spices and ingredients, (including already browned ground beef or turkey), then slow-simmering to meld flavors together.

Stew is built differently than chili. Although both are thick, stew is chunkier than chili. Stew meat is often seared then removed from the pan. The vegetables are then cooked in the meat drippings that are left. Then the meat is placed into the pan with the vegetables and all contents are sprinkled with flour. Broth is then added, and the whole pot is slowly cooked to tenderize the meat.

Stew is not usually made with red chili powder. (of course, there is no rule that says you can’t) Stew can use tomato sauce as a base, but this is rare. More commonly, stew will use a tablespoon or two of tomato paste to build additional depth of flavor when sauteeing the onions and other vegetables.

People can get intense about chili recipes as well. Chile cook-offs are a huge deal in parts of Texas, the winners earning some serious bragging rights. The history behind the largest cook off in Texas was a showdown between a cook from New York and a legendary cook from Texas. Click here to learn more and plan your trip to taste the best of the best chili.

Bisque is a very smooth soup infused with the flavor of vegetables and crustaceans, like lobster, shrimp etc. and blended with cream, that is usually served with a few pieces of meat from the crustacean in each serving of soup. It is often garnished with small crackers or croutons. The soup is French in origin and started to show up around the 17th century. It started out as a simple shellfish soup, complete with shells in the soup, but progressed into something quite sophisticated as French culinary intrigue really began to take off.

The base for bisque is a broth made from the little guys (or girls?) bodies and some aromatics like onion, carrot, herbs, wine or sherry, and tomato paste. The strained broth is puréed with vegetables and cream, then strained again, to make a very smooth soup. The meat from the crustacean of choice is then lightly sautéed in butter and herbs and is placed into the center of an individual serving of bisque.

Today, people have taken the idea of bisque to a whole new level with recipes such as. Butternut Squash Bisque, Mushroom Bisque and Tomato Bisque. I’m not sure these would qualify as a true bisque because they lack the shellfish base, but they are smooth, thick purées commonly finished with cream. so, they’re kinda bisque?

« What is a Chile Relleno?
The Best Green Chile Queso + 10 Queso ideas besides Nachos » 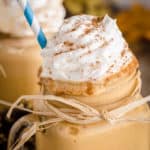 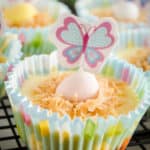 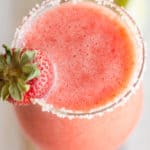