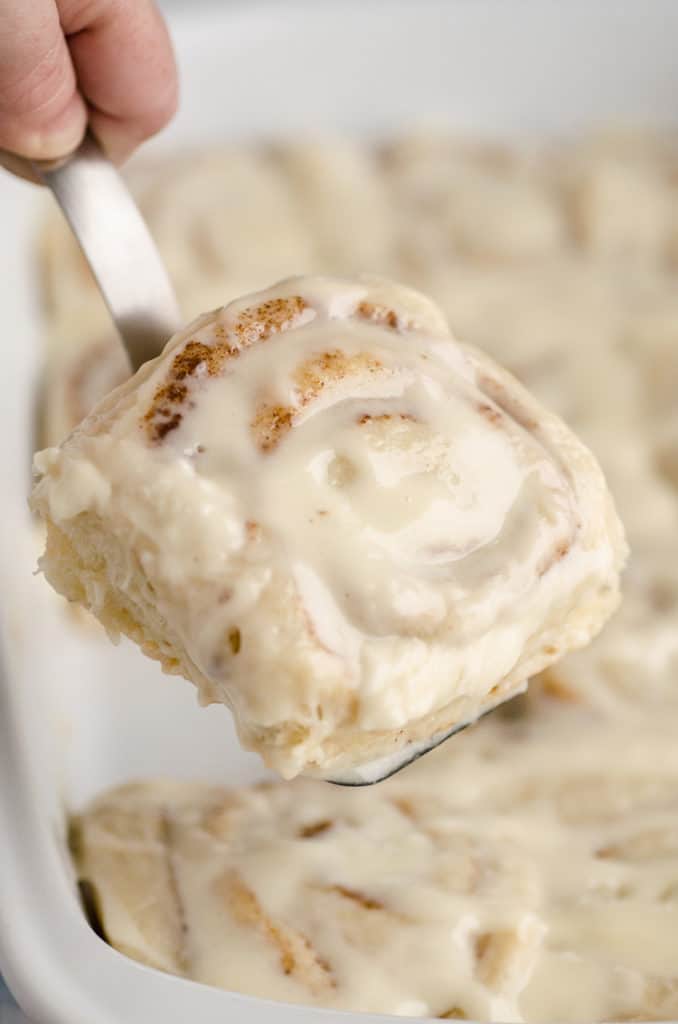 I’ll be honest, cinnamon rolls have never been a ‘go to’ dessert for me, but I wanted to come up with a great Goldilocks Kitchen Cinnamon Rolls recipe that would be irresistible and fast. (I have patience issues when it comes to my sweets.) I made several batches with different recipes, and took the elements I liked best and combined them with a rapid-rise yeast dough to create these ah-maze cinnamon rolls that fly out of the pan in seconds they are so good! 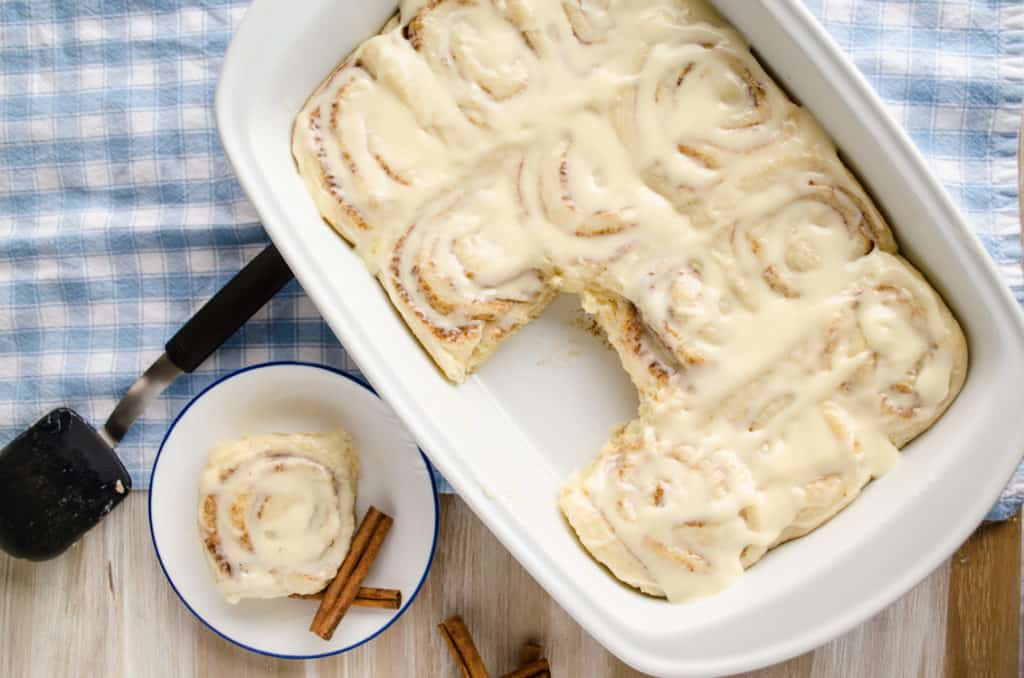 How to use Rapid-Rise Yeast 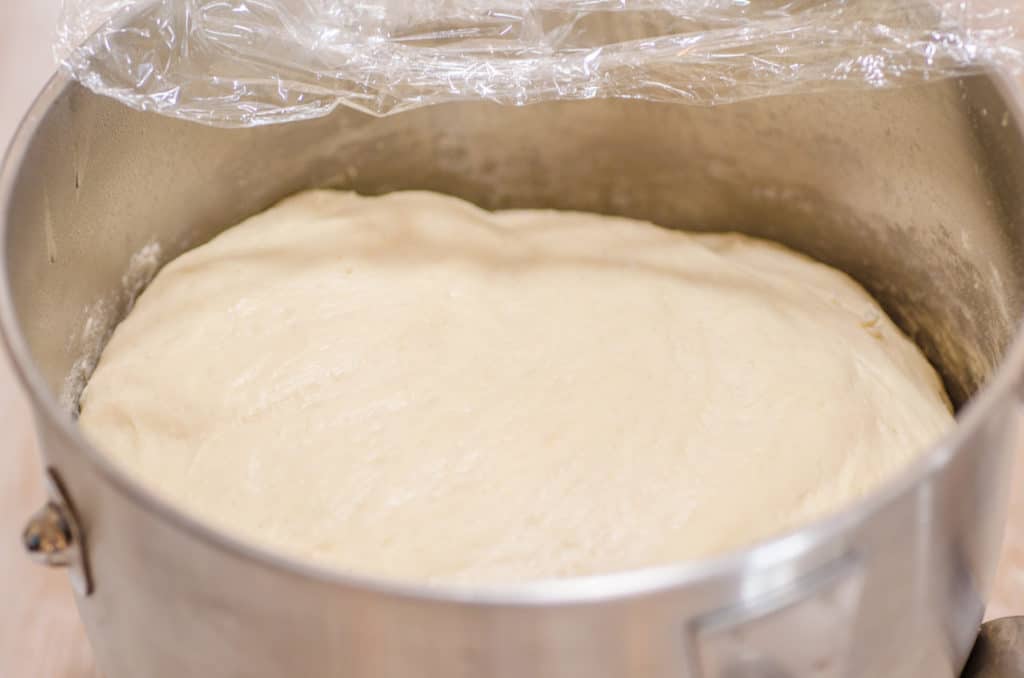 I’ve written the Goldilocks Kitchen Cinnamon Rolls recipe to specifically use rapid-rise yeast and a stand mixer. The dough pictured above has just finished it’s 10 minute rest and is very soft and easily shaped into the 12-ish by 18-ish rectangle you’ll need to make these rolls. I just sprinkle a little flour on my work surface before dumping it out. I like to sprinkle a little more on the top of the dough to make it easier to handle, then stretch and push it with my hands into a rectangular shape. I don’t even bother with a rolling pin! There’s no need for perfection here, just keep the thickness of the dough somewhat even as you spread it out. 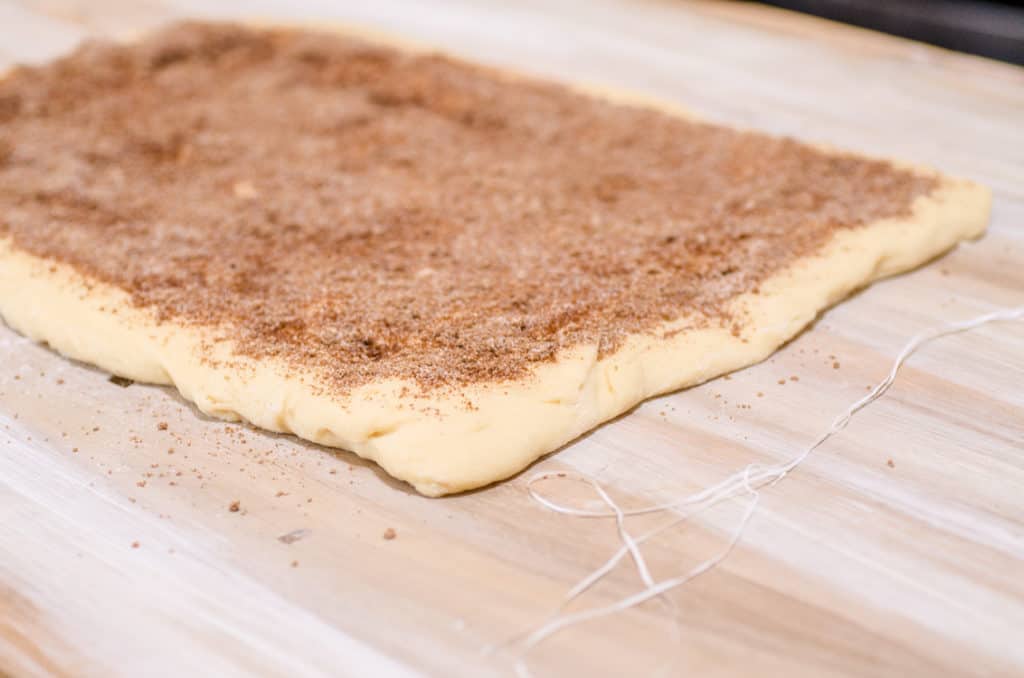 The key to really great cinnamon rolls is LOTS of melty butter and delicious gooey cinnamon filling, so I spread LOTS of melted butter over the dough with a pastry brush and sprinkle it generously with sugar and spices. Leave about 1/2 inch of dough clean on the long sides, but you can take the butter and filling all the way to the short ends. Roll one long side toward the other long side tightly and pinch the seam together. If it doesn’t stick, run a finger dipped in water over the inside seam to get it wet and help it stick.

Now comes the really fun part! You get to cut out cinnamon rolls with floss! Wiggle the floss under the dough about an inch from the end. Bring the floss up around the dough, crossing the floss over itself, and pull the ends! You instantly have a perfectly cut cinnamon roll. Continue down the dough, placing each cut roll into a buttered 9 by 13 inch baking dish. I like to have three across and for down, or 12 rolls per pan. My recipe won’t quite give you 24, but enough that you’ll need a second pan to hold them all. Remember, they may look small, but they’ll be double the size by the time you are ready to eat them. 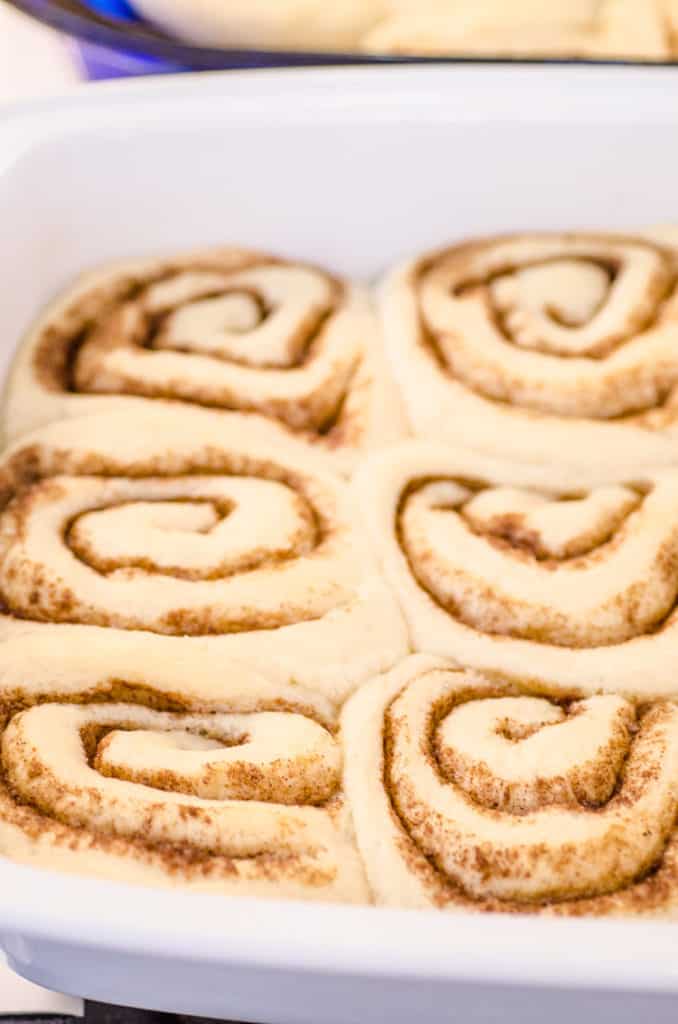 Above is a close up of the raw rolls in the pan after they’ve risen. I’ve found that with rapid rise yeast it only takes about 15 to 20 minutes for them to be ready to bake! 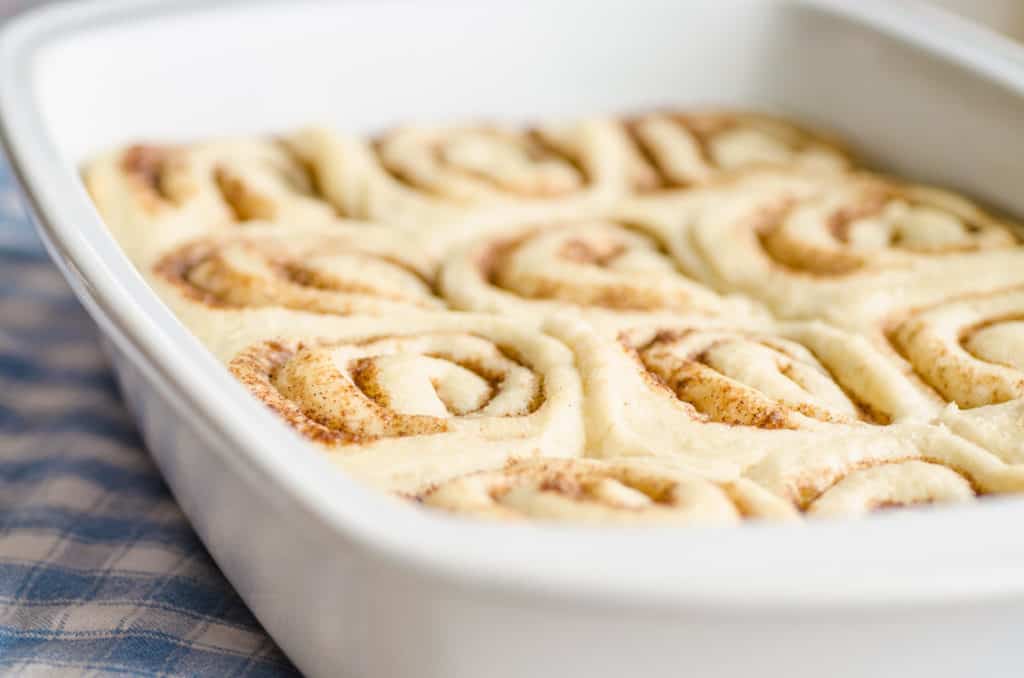 And here they are baked! Over-baked rolls will kill the whole recipe, so bake them just until they start to lightly brown on top; that means they are done. 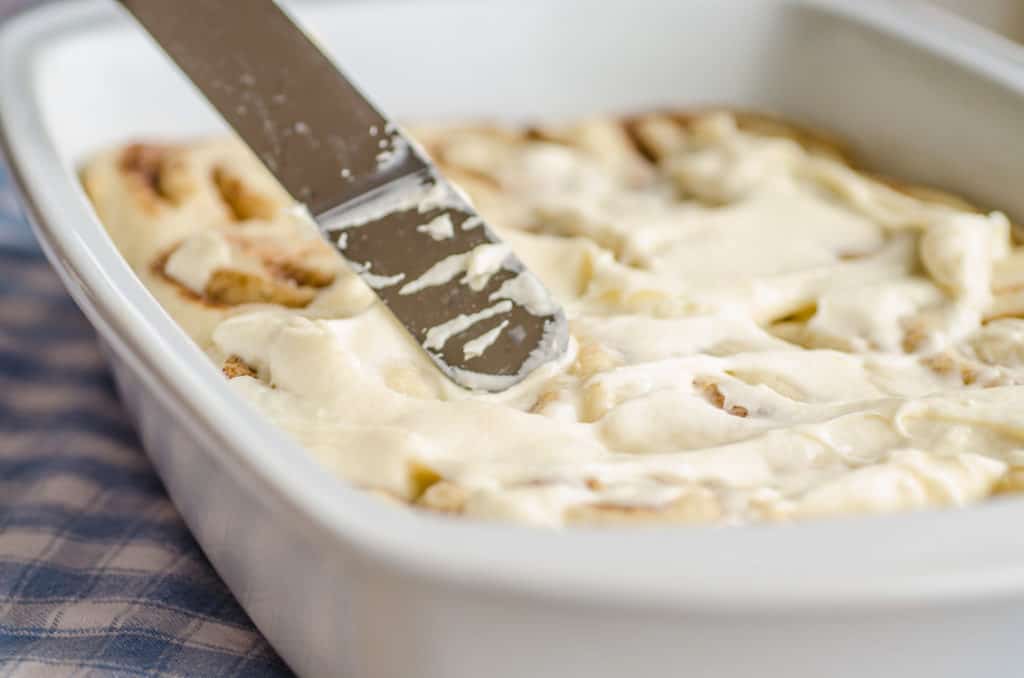 I tried three different icing recipes, none of which I was too happy with. Then out of a fluke, I mixed two together just to save space in the fridge. I happened to take a taste and it was REALLY GOOD! I’ve never liked icing that tasted primarily of powdered sugar, but this blend of icings had cream cheese, butter and vanilla which gave the icing some substantial flavor. The icing for Goldilocks Kitchen Cinnamon Rolls was born. 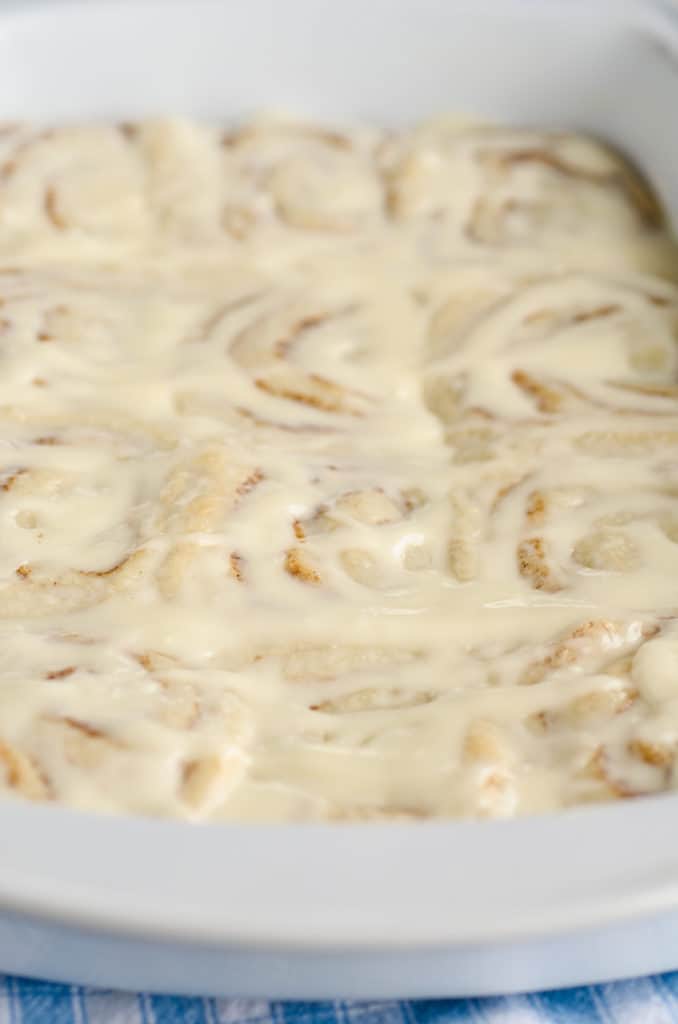 Whip up the icing while the rolls are baking, and then spread it on right after they leave the oven. No need to wait for a cool down, you want this stuff to melt all over :0) 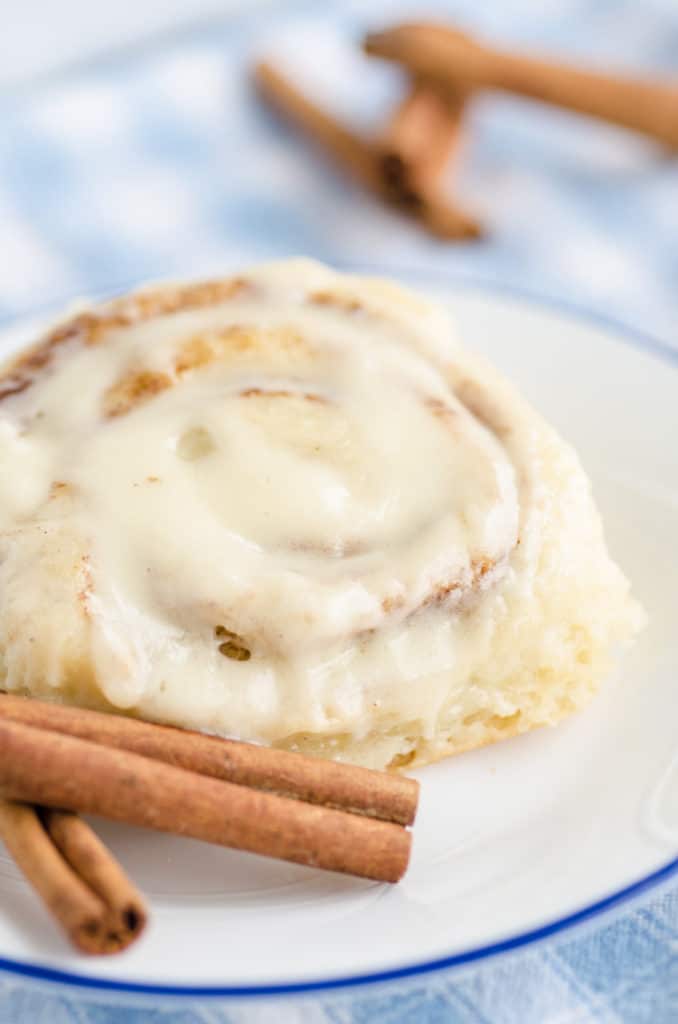 One taste of these and I think you’ll agree that they are some of the best cinnamon rolls you’ve ever had. Goldilocks Kitchen Cinnamon Rolls are diet busters for sure; an absolute indulgence. Be sure to share with friends and family so you don’t eat them all by yourself- you’ll be tempted for sure :0) Got a baking itch? Try this recipe for Quick Crusty Dinner Bread or The Best Potato Bread, which also use rapid-rise yeast. 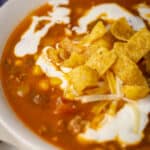 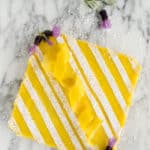 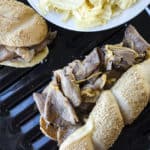 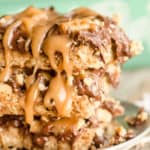 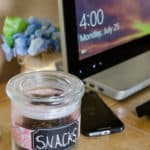